Twisted-tape inserts are beginning to be applied in a wide variety of areas due to their ability to improve heat transfer performance at a low cost (Paneliya et al. 2020). Basically, the presence of twisted insert tapes functions as a swirl generator and will modify the flow, especially in areas close to pipe walls (Martemianov and Okulov 2004; Paneliya et al. 2020; Smithberg and Landis 1964; Webb, Narayanamurthy, and Thors 2000). The swirl flow will increase the normal velocity gradient on the pipe and result in a reduction in the thickness of the thermal boundary layer, so that the heat transfer will be higher (Shinde, Patil, and Dange n.d.). Meanwhile, the use of twisted insert tapes has a consequence of increasing pressure drop in the flow and will have an impact on higher energy requirements to overcome this pressure drop (Paneliya et al. 2020). Therefore, increasing the heat transfer rate using twisted insert tapes needs to be considered so as not to produce too high a pressure drop.

Research and studies on the use of twisted insert tapes have been carried out by many researchers. Wang and Sunden, (2002) conducted a study on the heat transfer coefficient through the flow of water flowing in a tube equipped with a twisted insert tape. And it was found that there was a 3x and 3.5x increase in laminar and turbulent flow, respectively, to the water flow in the tube without inserts. Then, Agarwal and Rao, (1996) and Sarma et al., (2005), made a correlation between pressure drop and heat transfer on a tube using a conventional fitting model. From these studies, it was found that the presence of a tape insert would inhibit the transition jump from laminar to turbulent. However, because it causes a continuous fluctuation in turbulent flow, the heat transfer will be drastically decreased.

After finding the fact that the use of insert tapes can increase the heat transfer rate, several other researchers conducted further studies, namely the effect of variations in the geometry of insert tapes on the heat transfer rate. Bhuiya et al., (2016) conducted an experimental study of several helix-shaped tape inserts that had different pitch ratios and were applied to turbulent flow. This study shows that if the pitch ratio value gets smaller, the heat transfer coefficient and pressure drop will increase. However, the increase in heat transfer is more significant than the increase in pressure drop, so the energy used will be more efficient. Garcia et al., (2018) Studied three different wire coil inserts and three different twisted insert tapes for applications in solar collectors and found that there was an increase in heat transfer and a decrease in temperature on the walls. Then, Yadav et al., (2012) Performed CFD simulations on applications of twisted tapes that have different lengths, namely the full length (from upstream to downstream), only half the length on the upstream side, and only half the length on the upstream side. downstream side. It was found that the full length twisted tape insert provided the highest heat transfer rates. Meanwhile, twisted tape inserts that are only half long on the downstream side have better performance than those that are only half long on the upstream side. Bhuyan et al., (2017) Conducted a numerical investigation regarding the comparison of heat transfer characteristics between twisted tapes inserts with full length and short ones under transient laminar flow conditions in U-loop shaped pipes. It was found that the highest exit temperature was generated in U-loop shaped pipelines with twisted insert tapes of full length and then followed by U-loop pipelines with short twisted insert tapes. Both result in higher outlet temperatures compared to ordinary pipes (plaint tubes). Another CFD simulation study on twisted insert tapes was carried out by Piriyarungrod et al., (2015). This study showed that twisted insert tapes with clearance ratio with value of 0.05 produced the highest performance compared to other clearance ratio values.

Based on a review conducted by Yousif, A.H. and Khudhair M.R. (2018), and also from some literature that the author has explored, until now there has been no study that discusses the use of insert tapes for use in evaporation applications. Referring to the results of studies that have been carried out, it is hoped that the use of insert tapes can also increase the rate of evaporation. This study is intended to find out the use of the screw tape insert as an heat transfer enhancement passive technique for evaporation process.

This study also compares two screw inserts geometry with different pitch length; 25 mm (left) and 25 mm(right). The length of the screw is 100 mm. The inner and outer diameter of the geometry sucessively are 15 mm and 20 mm. Both geometry is placed inside a channel with 120 mm long as shown in Fig.1 below. 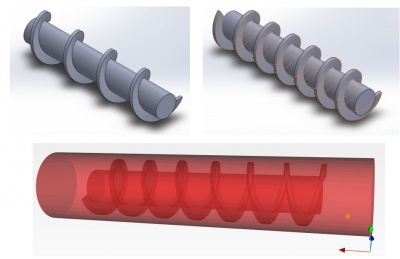 Standard air is used as the working fluid. The resulting mesh for CFD simulation is shown in Fig. 2 below 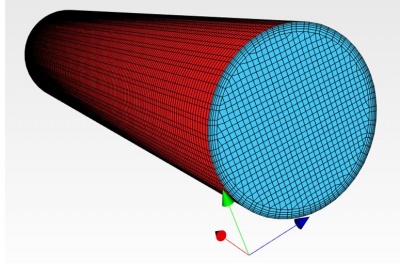 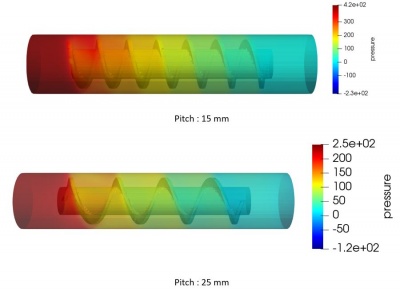 The pressure distribution profile at the cross-sectional area is shown. It is obtained that at x=0.01, there are low area of pressure and high area of pressure. The high pressure area indicates that the fluid is blocked by the geometry and thus it produce stagnation pressure. While the low pressure zone indicates that there is a gap that fluid can move through it, hence it would now produce stagnation pressure. This contour is also have the same pattern in x = 0.02 until x=0.1 which is at the end of the geometry. 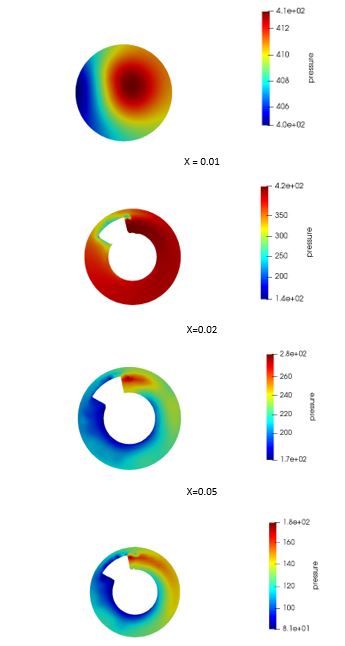 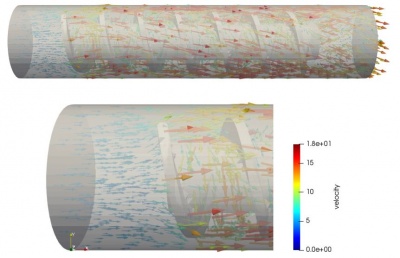 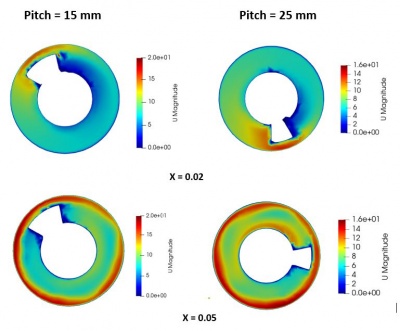 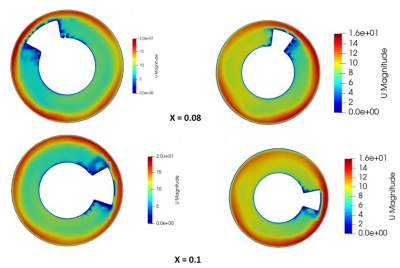 The study of the heat transfer enhancement by using passive screw insert tapes has been performed. It can be concluded that: