We need to utilize structural software as mechanical engineers cover the building concept and leads to the decision of piping system, cooling system etc which consist inside the building.

Theorem is produced from axioms and become law. This case occurs because we believe on mathematics as exact knowledge, and mathematics could solve or proof problems.

Early approach by using continuation concept, object is considered to have continuing characteristic. From there, mathematical modelling is developed. It goes to navier stokes equation, that mathematical equation is for fluid flow prediction based on momentum and mass. Likewise, software, if we consider object to have rigid body which particle could inter-react one another.

We then need to start questioning what force to be inputted and what the result is yielded from simulation. We are not only learning formulas, but the foremost is how to use and apply them. “Economy will be outdated as it chases big profit from small amount of worked” -DAI-

The talk then derails to truss characteristic which is about stress acting on the member. It can be elaborated such as:

1. Simple or Direct stress
a. Tension
b. compression
c. shear

simple tension and simple compression occur when applied force (load) is linear with the axis of member and simple shear occurs when equal, parallel and opposite forces tend to cause a surface slide relative to adjacent surface.

a. Bending
b. Torsion

In certain loading situations, stresses cause the member to bend resulting in deformation of material such stresses are called indirect stresses.

3. Combined stress: Any possible combination of direct and indirect stresses.


While the strain is deformation produced by stresswhich can further be classified into 4 type of strain:

Differentiation is required to solve one big system which is divides to small part therefore small changes and characteristic from one particular part can be seen. As we need for example to figure out stress and strain from one section of truss from 3 dimension of x y z, differentiation becomes necessary to show critical point and location hence engineers could determine which material and shape to be used.

As the advancement of the software, the skill and proficiency of using it to model, simulate, and analyse is necessary. Practical example is building, as it needs structure to support the mass, it requires thorough assessment to ensure the structure capable on handling and guarantee the safety objects inside the building according to the design and prevailing provision. Frame 3DD is one of a freeware anybody can utilize to simulate structure by inputting structural and environment data imposed on the building to simulate and visualize the phenomena. The accuracy and precision of the software in ideal condition produce remarkable result but engineer as decision maker needs the basis knowledge to give the best decision. Verification and validation are also necessary to improve the result to yield unanimous decision among the engineers.

Students have the capability to predict and measure the probable model of a simple roofing structure to be built and analyse the output.

Designing the simple roof model, determine nodes and frame to be simulated. For this assignment, Tri-Bearing type of roof is used. The model can be seen below. 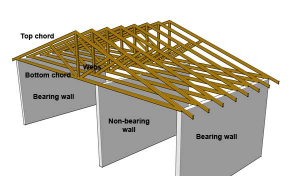 Or in simple figure

The model will be arranged backward to be as near as the real system.
Data

In the software we could try download example of model from the website and manipulate the data as desired.

For this case we need to consider: 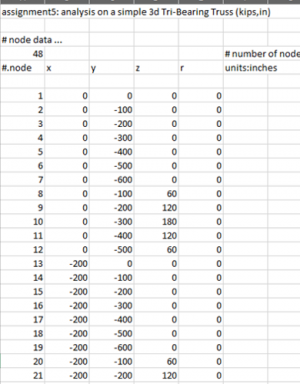 Set the nodes and location, determine by 3 dimensions composed with x y z axis, r as complement for round shapes structure. Here, 48 nodes are set.

As nodes reaction depend on how the condition either we set free or fixed then, we should determine which nodes have to be set as it affects the calculation. 12 important nodes set fixed. 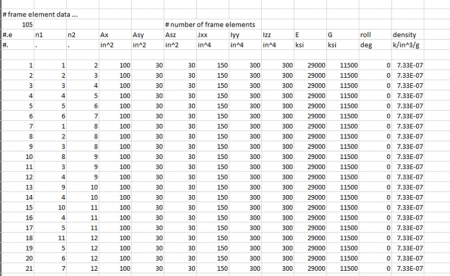 Then, we determine truss which connects specific node as Tri-Bearing type truss has been stipulated. We could determine trusses’ positions, properties such as elasticity, degree of roll, density inertia and so on.

Because the simulation is undergoing simple static load, sear and geometric stiffness is not considered or negligible. 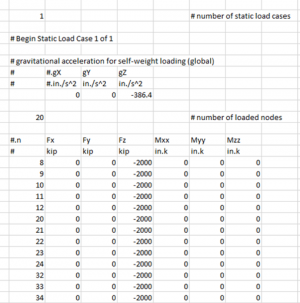 Figure above, show the load case given to the structure. Gravity plays role as mass act as internal load. External load can be either axial or moment force, for this simulation model is imposed only from z direction on several nodes in an extreme 2000 kip, therefore, tangible deformation can be seen. Then the excel file can be saved, shown below. 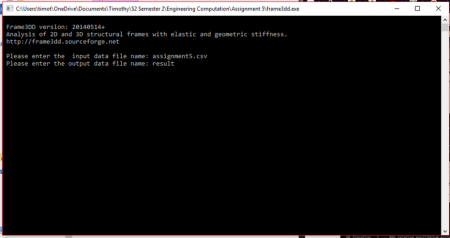 The file saved with ‘assignment5’ as its name, with all the output of simulation will be created under the name of result. 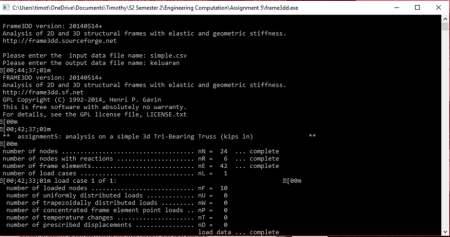 Shown above the processed after running the system. If no error or fail to be found, the system will finish the whole calculation. Then separated files are produced automatically, consisting result and output from the simulation filled with data which we can analyse. 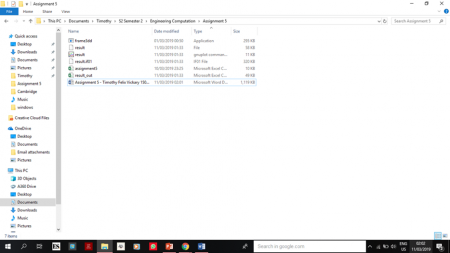 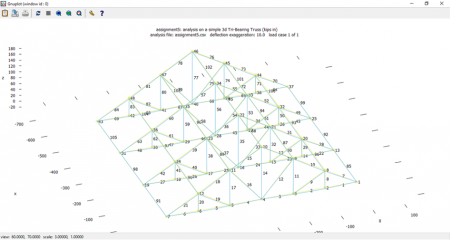 Above shown from gnuplot file from the result. Yellow and green colours indicate the deformation and deflection occurrence, while the blue colour indicated the original truss condition before imposed 2000 kip downward from chosen nodes.

Data from the simulation can be seen from the attachment, further changes as it can be shown in graph will be conducted later.

From the simulation, it is known that frame 3DD is a powerful software to help engineers determine their model by imposing loads internally or externally, then show the behaviour of the model which could assist on the decision either reconstruction the model or give any retrofit to enhance the quality and characteristic of the model as verification and validation are conducted afterward. This is important because the engineer’s decision it to be held accountable for the safety and feasibility of the system.

Notes
The figure shown only small part from the whole data. See the attachment for further understanding which is not covered in this paper.
Retrieved from "http://air.eng.ui.ac.id/index.php?title=Fifth_Class_Meeting_-_Timothy_Felix_Vickary&oldid=5427"