1.1 Background
1.2 Report Objectives
1.3 Scope of the Report
1.4 Date and Place of the On Job Training
1.5 Report Outline

The main objective is to provide a collection and summary about the data of PT.PLN UIP2B renewable-energy sources in the electricity generating system in Jawa-Bali. In addition, there are other objectives that are mainly for administrative purposes. They are as follows:

For the Internship Student

For the Company (PT. PLN UIP2B) in this case

The internship was conducted in PT. PLN (Persero) Unit Induk Pusat Pengatur Beban (UIP2B) Jl. JCC, Gandul , Cinere, Kota Depok, Jawa Barat. The duration of the internship is from August 3rd 2020 to September 30th 2020. However, due to the COVID-19 pandemic, the internship was mainly conducted as a work from home project with zoom call meetings and discussion at usual working hours from monday to friday.

PT. PLN (Persero) is a state-owned enterprise that fully manages Indonesia’s electrical power field. On October 27th, 1945, Indonesia’s then president, President Soekarno established the Electricity and Gas Bureau under the Department of Public Works and Energy. However, on January 1st, 1961, the Electricity and Gas Bureau was changed to BPU-PLN (General Chairman of the State Electric Company) engaged in electricity, gas and coke. But, exactly 4 years later BPU-PLN was dissolved. At the time of the dissolvement of BPU-PLN, 2 (two) new companies were inaugurated, namely the National Electricity Company (PLN) to manage electricity and the State Gas Company (PGN) as the gas manager. And up to this day, PT PLN is the only company that sells electrical services in Indonesia. PT. PLN divided the company into units, the Main Office (Kantor Pusat), the Main Units and/or Centers (Unit Induk dan/atau Pusat-Pusat), the Executor Units (Unit Pelaksana), and the Service Units (Unit Pelayanan). 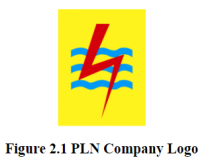 Meaning of the elements in the company logo:

Symbolizes electric power as the main product of the company. It also means fast and accurate work by the employees of PT. PLN in giving the finest solution towards the consumer. Red on the lightning represents sophistication of the company being the first electric energy corporation in Indonesia, also reflects tenacity in working and courage to push forward technology development.

Represents electric energy flow from the three main aspects the company works on: Generation, transmission, and distribution. The color blue shows the impression of consistency being in the life of the community and also it represents reliability.

Being the base of the symbol, it shows how PT. PLN is a well-organized corporate and field. The color yellow symbolizes enlightenment, as how the company enlightens the community. It also symbolizes the fiery spirit that is within the people of the company.

Atmosphere of appreciation and open between company members that is based on trust and integrity, good faith, and competence from parties that are interconnected in conducting clean and ethical business practice.

Reflection of the will to keep and maintain work quality in company, with awareness of every problem faced by the company and finding the right solution.

The act of company units to always question system and development practices, management and operation, and attempt to dominate science and technology development for the sake of continuous company renewal.

Always strive to satisfy customers and fulfill their needs fast, correctly and accordingly.

Values highly human dignity with all its advantages and disadvantages and recognizes and protects human rights in running business.

Giving the same opportunity to every company unit to gain achievements and occupy positions accordingly with the criteria.

Ready to share knowledge and experience with company units, growing curiosity and appreciating ideas and innovations.

Consistent in preventing conflict of interests and guarantee every decision is addressed to company interests.

PT. PLN UIP2B or Unit Induk Pusat Pengatur Beban is one of the main units under PT. PLN that manages the load regulation in jawa-bali. In this PLN unit, they carry out electric power system operations and manage the distribution of high voltage electric power. The UIP2B is a unit of PLN as an extension of the head office for electricity services at PLN, as well as an institution at PLN as support for PLN's electricity business in the region. In short, this unit does the load regulating and the operation system of the main 500kV power plants and 500kv substation in Jawa-Bali. Also together with the regional unit, this unit manages and regulates the small-scale local generation systems connected to 150 kV, 70 kV and 30 kV systems and the transmission systems. The UIP2B unit divided according to its function, for example, PLN West Java Distribution Main Unit which is located in Bandung as a distribution service in West Java Province, or PLN Central Java Transmission Main Unit as electricity transmission service in West Java and Yogyakarta Central Java provinces. Meanwhile, the mains are PLN institutions that support PLN's business, for example, the PLN Education and Training Center (PUSDIKLAT), which is an institution for the development and training of PLN employees, as well as other centers. The parent unit and centers led by a General Manager of the Main Unit or General Manager of the Center. 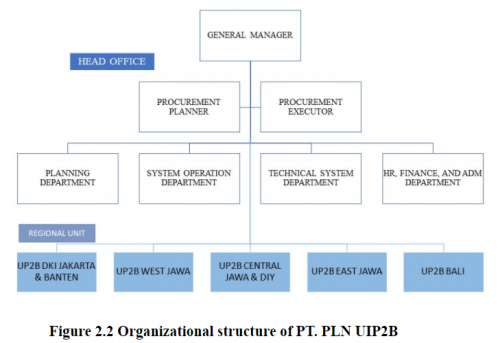 Solar produces energy by converting the sunlight energy into electricity with solar cells or Photovoltaic (PV). Solar panels also benefit from having a long lifespan, 30 years, and produced in a variety of sizes and types. Solar could also convert the sunlight energy with another device called concentrated solar power (CSP). CSP generates electricity by concentrating solar rays into mirrors. The concentrated solar rays will produce rays that heat a fluid that creates steam to drive the turbine, and the turbine generates electricity.

Hydropower technology is one of the renewable power plants in Indonesia. Hydropower has a dam to keep water in the human-made lake. When the dam's water is released, it will create potential energy that will move the turbine. The turbine is connected to a generator that will generate electricity. Then the water will return back to the dam, and the cycle keeps going on.

Wind power technology in Indonesia uses the Horizontal-Axis turbine type. The turbine will be built 30 meters or more above the ground. Building a tower wind turbine tall above the ground will allow the turbine to generate more kinetic energy with faster wind speeds above. Horizontal-Axis turbines commonly use two until three propeller-like blades connected to a rotor. When turbines catch energy from the wind, low-pressure air will move the blade. This will cause the blade to turn the rotor; the lift. The force from the lift will cause a drag where the force is stronger than the wind’s force. The combination of drag and lift makes the rotor spin. Indonesia has two wind power stations that still operate until this day; PLTB Sidrap in Watang Pulu, South Sulawesi and PLTB Tolo 1 Jeneponto in Binamu, South Sulawesi. These wind powers have operated since 2018 with the capacity of 75MW at PLTB Sidrap and 72MW at PLTB Tolo 1 Jeneponto.

PLTS in Indonesia uses photovoltaic type as the power generator. PV (Photovoltaic) will convert sunlight to power (electricity). Photons from the sunlight hit the PV panels material, where the free electrons are being generated. The photons go through the material and will produce an electrical DC (direct current). The DC will convert into AC with an inverter then it will be used for an electrical grid. PV panels only work as a converter of energy, transmitting the energy to where it is needed. Indonesia has 24 solar power plants with 22 solar power plants that still operate until this day. Two solar power plants that stopped operating are located in Bali due to failing on maintenance. Meanwhile, one of the solar power plants that still operates is located in Purwakarta, West Java, named PLTS Cirata, with a capacity of 1 MW. PLTS Cirata is located at the same place as PLTA Cirata, the biggest hydropower in Indonesia. Its photovoltaic systems are installed to float above the water dam.

PTLBg uses organic waste that went through a process namely anaerobic digestion. It is a process to break down the organic material from the bacteria in an oxygen-free environment. Recycling the original material then turning it to biogas, containing energy in gas form and soil products (in solid and liquid forms). In 2017, Indonesia has a PLTBg from a private company at Libo, Riau. The power plant was built and used for personal purpose (Kernel Crushing Plant Factory), yet the private PLTBg still has another 0,5MW left unused. In 2018, PT PLN (Persero) also signed a 2-year contract with a private company that owns the power plant at Central Kalimantan. This contract allows PT PLN (Persero) to improve the renewable energy usage in South Kalimantan and Central Kalimantan until 8,8 MW. Based on the table for the energy plant capacity, PLTBg has a significant increase with 20,48 in 2014 into 108,62 in 2018.

PLTBm uses boiler gasification to convert energy from organic waste into renewable energy sources such as electricity. Organic waste will be treated at a high temperature, above 700 Celcius, without the combustion process. The high-temperature conversion will also be controlled by oxygen and steam into hydrogen, carbon dioxide, and carbon monoxide. The carbon monoxide will react with water to form carbon dioxide and hydrogen in the water-gas shift reaction. Then the special membranes will separate the hydrogen from the gas stream. In 2018, Indonesia, with a private company, built PLTBm Siantan in Wajok Hulu village, Kalimantan. The biomass power plant uses gasification technology where the boiler will generate energy by consuming rice husk, bagasse, and agricultural waste as its fuel. This PLTBm has a capacity of 75.00 kWh, equal to 25.000 Ton CO2e. In 2019, Indonesia built a PLTBm in Siberut Island, Mentawai. This power plant uses bamboo as the energy sources combine with forest residue. With a total capacity of 700KW, this PLTBm could light up three villages in Mentawai.